I’m a sucker for vintage stuff. Old cars, movies, old cameras… There is something about old stuff that always makes me yearn for the good old days, even those good old days that occurred waaaaay before I was even born. So I’m not sure exactly what is appealing to me about vintage stuff, but I do know when the retro/throwback thing doesn’t work.

Against my better judgement I decided to try out a pack of Topps Heritage. I saw a few inserts that looked cool, and if I could get lucky with one of those it would make up for a lackluster base card. (I was also secretly hoping that I could get lucky and find a really cool base card, my reasoning was that the scans I had seen were not doing the originals justice.) Apparently I’m still as unlucky in picking up hits as I am in picking up girls, because everything in the pack was lame. 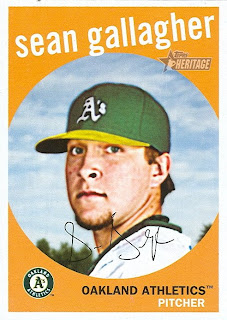 Really I’m not sure what they were thinking when they came up with this concept. I guess the concept is good, just not the implementation.

The main problem is that it seems that the art department seems to think that vintage and out of focus and badly exposed photos go hand in hand. Anybody who knows even a little about photography knows that this isn’t true. Take any old card and look at the photos. I know there's a lot of bad cards out there, but I’m sure they’ve seen the good ones. Plus, why would you purposely try to make the cards look crappy. I don’t get it.
Speaking of cool cards, this card is proof that they’ve seen at least one cool old card that’s not badly exposed, out of focus or posed weird. I say that because they’ve included it on this Then and Now insert thing. 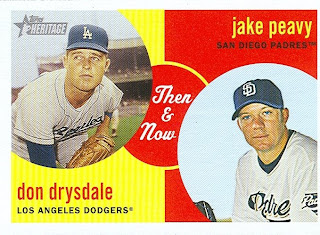 This is a perfect example of what to shoot for with a vintage look. Stadium in the background. Cool pose. Good exposure. I kind of think that maybe they desaturated Drysdale’s section to make it flow more with the Heritage theme. Maybe I’m wrong, I don’t have a card from that era to compare it with. It's kind of sad, but only the left half of this card is worth owning. 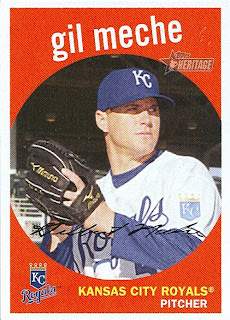 This seems to be better to me. I like the pose, especially since it’s outside with the bleachers in the background. The card looks kind of crapified, just not as much as the rest of the cards in the pack I opened.

The Fleer Tradition cards are kind of nice. They have really nice bright photos with good colors. They’re just basic cards with old borders to make them look a little vintage. The backs are glossy too, which doesn’t fit with the vintage theme, unless you get one of the parallels. 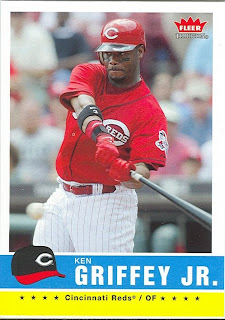 They’re black and white on the front (also obviously darkened) and the backs are printed on non-glossy gray backs with de-saturated colors. It’s a nice look, but once again, why does vintage have to equal under-exposed? 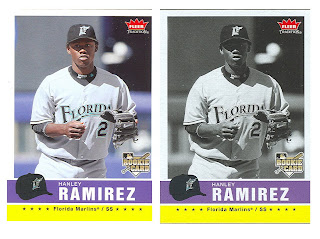 I’m really happy with the 2007 Goudey’s I picked up though. The two packs I picked up had pretty cool renditions of the players. The worst one I saw was this card of Felipe Lopez. Actually there are a couple more that were borderline crappy. The players faces are all mushy looking. I think the whole idea with the smaller square cards and the unusual poses and backgrounds look better overall. 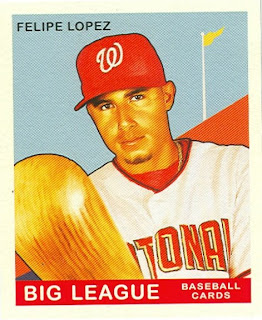 This one however is the work of a genius. I’m not just saying that because it’s a Met. I think it’s because they left in most of the original photo of Delgado’s face and didn’t Goudey-ize him too much, just the background and bat. I think maybe the hands are a little too “real” looking. Maybe they could’ve blurred that out a little more. 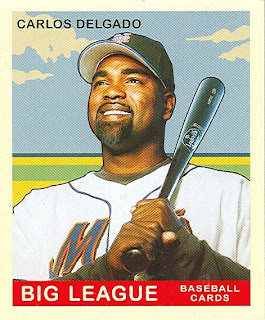 It looks pretty cool on my desk too. 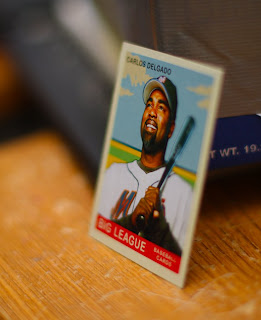