On a search for binders and sleeves I stopped by Walmart hoping that I could get in without buying any cards. I saw a bunch of blasters of Allen and Ginter and I had to check it out. I wanted to find out how it compared to the Target blaster I picked up about a week ago and of course to see if I could chip away at my base set of cards. 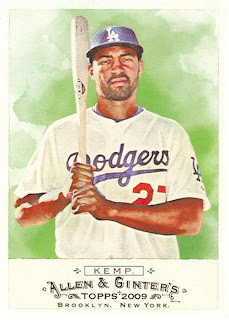 I think Matt Kemp looks a little like that rapper Redman. At least I think that's his name. He was a member of the Wu Tang Klan. 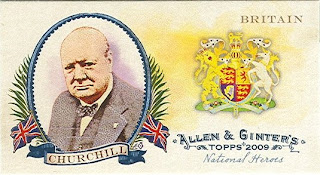 Everytime I pull a non-baseball card I feel like El Guapo when he gets a sweater. 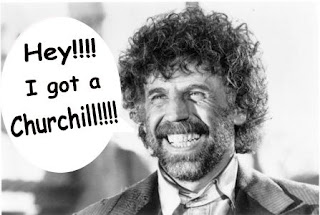 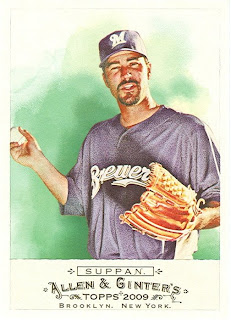 This is a funny "off the cuff" type of candid shot. I wonder if he's happy this is his official A&G card?

After seeing the hits that other people were pulling I was sort of hoping to find
something interesting in my blaster.

I didn't really find any hits plus they shorted me a mini and a base card, which really sucks when you only have 4 real base cards per retail pack.

I thought that the blasters were the best for finding a wide variety of minis, but I was disapointed to be shorted a mini and I only pulled one black border mini with no hand numbered minis in the blaster.

This went a long way to finishing my base set as I only pulled 8 base set doubles.

I really wish I could use some sort of restraint when I see box of Allen and Ginter. If so, I might actually be able justify just buying a hobby box.

I think this puts me at still needing 200 base cards to complete the set. Hahah!! Just writing that makes it seem like such a hard thing to finish. 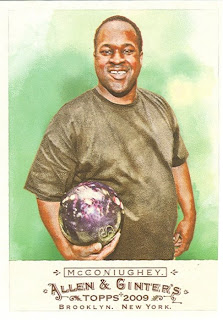 McConiughey is a bowling champion with the special olympics. He has "rolled" an 800 series which apparently is harder to do than a single 300 game. Look at how big his bowling hand is!!