My card collecting has been pretty conservative to say the least. sure their were a few dalliances with Mork and Mindy cards in the early '80's, a few Battlestar Galactica cards and of course an all out obsession with Garbage Pail Kids in the mid '80's. Since I've gotten back into card collecting I've been pretty much focusing on Topps '08 and '09 but since checking out the baseball card blogs I've noticed that there is a whole 'nother world of cards out there.


I headed out to Vintage Stock tonight to see what a hobby/re-packed toy store would have for card selection. I really wanted to branch out and see if I could find something interesting to buy. I wasn't disappointed. I kind of wished I would have picked up a few things they had, but I'm really glad I got the stuff that I did. The Yankee Stadium card with the Ali fight ticket insert thingy was pretty nice looking. They had a cool Brooklyn Dodger card, but I wanted to buy some new packs. I didn't want to just buy a couple of cards, when I could possibly get a decent amount of good stuff. Also, I had gotten burned by buying older stuff earlier in the day and I didn't want to repeat taking a chance on overpaying for just one card.

I decided to pick up a pack of Upper Deck's 2008 Masterpieces Football, 2006 Topps Updates and Highlights pack and a pack of 2008 Allen and Ginter.

The first pack I opened was the Topps Updates and Highlights pack. I'm guessing that these update cards are filled with post-season highlights and All-Stars and Dynamic Duos and all that kind of stuff more than just base cards. 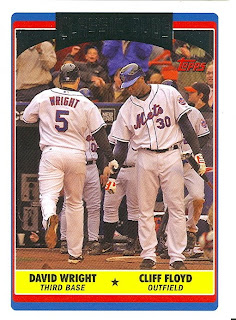 I was happy to find a few Mets cards. This is cool. This is a gold parallel card, my first. 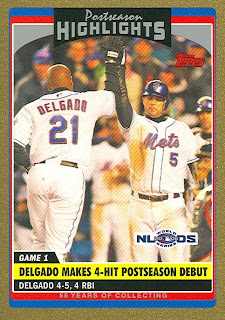 Anyway the cartoons on the back of the card are nice. It reminds me of some of the old cards I used to collect. 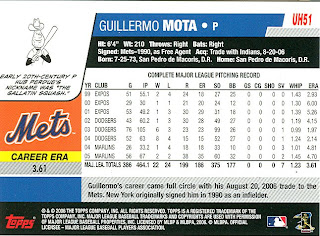 I really like the color scheme on the border that relate to the team's color. I think the cards look really slick. 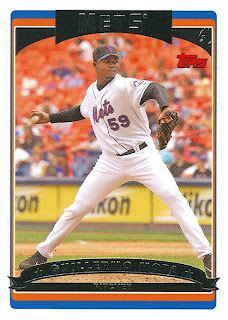 The second pack was really nice too. My first Upper Deck since I started collecting again. 2008 Masterpiece football. BINGO!!! This is great. 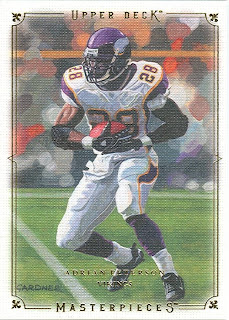 I now know what I'm going to ask A.D. to sign if/when I see him. I was going to have him sign my press pass from the 2007 Fiesta Bowl, but I think this would be easier to carry around and display. The pose might seem a little awkward to most, but for someone like me who has been following (obsessing?)over Adrian's career it's actually when he starts to switch gears after receiving a handoff. Sometimes he "bunches up" before he changes direction after crossing the line of scrimmage. I noticed that this card was the only one in the pack that had the artist's signature on the bottom. I don't know if that is just a coincidence and the other cards had the signature cropped out or if I just got an even cooler card. As always, if anyone knows for sure feel free to educate me about these cards. 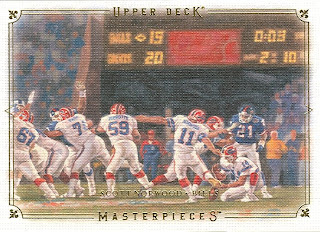 I pulled a Ben Roethlisberger card too. His sister plays basketball at OU. This is a nice card. 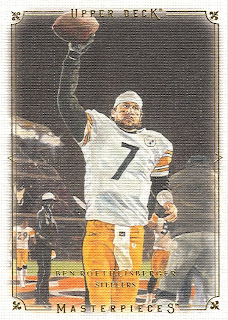 This Scott Norwood card is interesting, but a little depressing. I know what it's like to lose a game by one point (the aforementioned 2007 Fiesta Bowl.) So I'm not sure why U.D. decided to give this scenario the “Masterpiece” treatment. I guess if you're a Giants fan it makes sense. 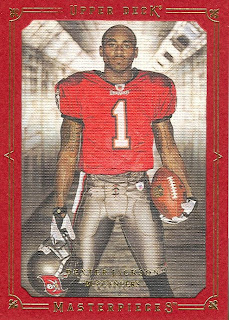 I got a few more that are cool, and I like the printing on the canvas material. I think that might be a good series to collect, even though I've never finished a set.

Speaking of sets I bought a 2008 of Allen and Ginter. Awesome. Wonderful. Exciting. Austere*. 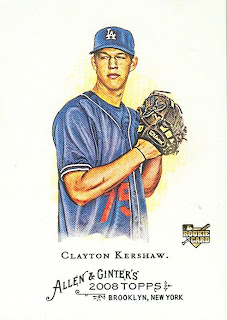 I got this cool Ichiro mini card with the fabric and stuff. This is also a first for me, a card encased in some sort of plastic with fabric embedded in it. Nice. Everytime I see Ichiro I always think back to this Taiwanese girl I used to know that loved Ichiro. She was sort of a sports fan, but it was mostly because she had a crush on him. 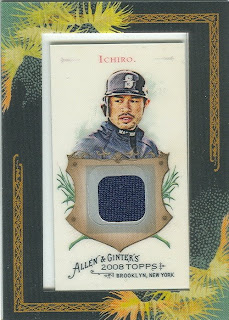 The cool thing about these cards are that you can immediately tell who they are. The Ichiro is a mini-card, but it's obvious that it's him even with the batting helmet.

I don't think the scans that I've seen of these cards really do it justice. All of them are exceptional cards and judging by the previews of the 2009 set I'm definitely going to try and complete that set.


I really hate to keep harping on this, but that 2007 Fiesta Bowl was a real kick in the balls. I mean this was A.D.'s last game as a Sooner and my first and only (so far) bowl game. I was really hoping it would turn out better. When Adrian took the hand off on first down to score in the first overtime I was sure it would be the game.
Here is a shot from that game. 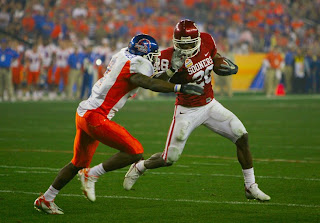 That is during the second quarter I believe.
I didn't notice until recently that the horizon line wasn't straight and it took looking and dissecting baseball cards to make me realize that I needed to fix the shot.


Still a little bitter about that loss, but that's why I'd like to have him sign my press pass for the game rather than a card, but that Masterpiece card is a really nice card.
Posted by Jeremy at 1:38 AM